Maria Ressa ’86 receives a congratulatory call in Oslo, Norway from her classmate Doug Platt ’86, an entrepreneur in Florence, Italy. 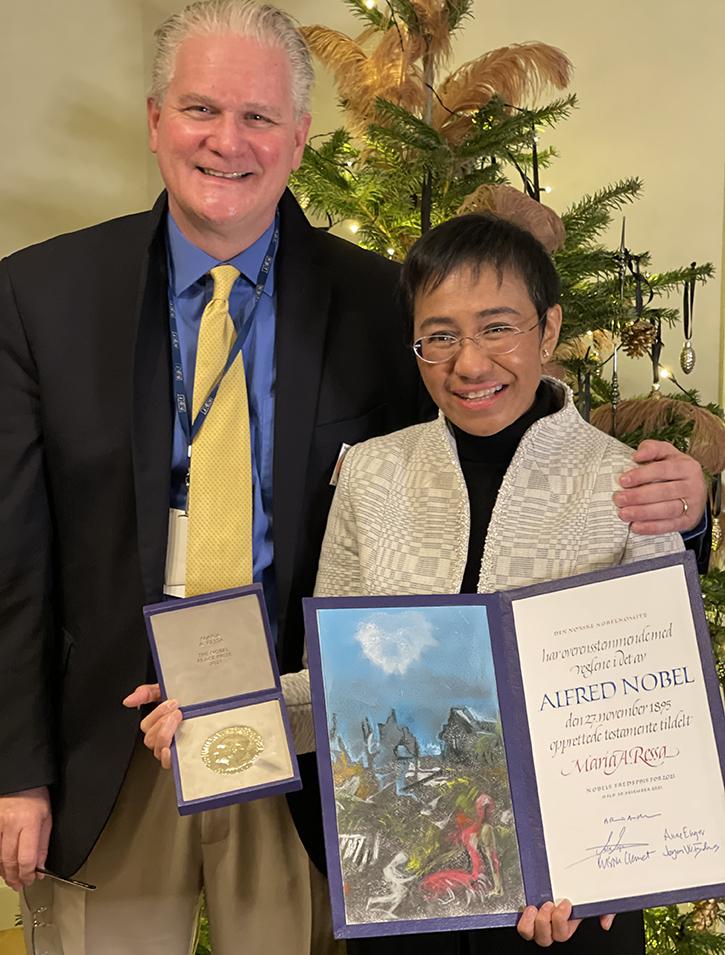 Susan Kirr ’86 logged on to a Nobel Peace Prize watch party early Friday morning with dozens of Princeton classmates. Rappler, the news site run by her classmate Maria Ressa ’86 in the Philippines, had organized the event. As students, Kirr and Ressa had put on plays together at 185 Nassau St. and Theater Intime. Rappler reporters wanted to know what Ressa was like as a student.

“She was a bright, shining star,” said Kirr, who lives in Marfa, Texas, and works as a feature film producer. “She had this mischievous, beatific smile every time you saw her, so happy and intellectually engaged and curious. She made you feel like you were a very, very special person to her.

Kirr began to cry and rubbed his eyes.

“I’m sorry, I get emotional because I’m so proud of her.”

Hours later, Ressa received her Nobel medal in Oslo’s cavernous city hall before a socially distanced audience that had shrunk to just 200 due to the spread of the omicron variant. It was a remarkably intimate event.

The Norwegian Nobel Committee honored Ressa and another journalist, Russian Dmitry Muratov, for highlighting growing threats to press freedom and democracy. In her acceptance speech, Ressa criticized social media companies for profiting from the spread of misinformation.

“If you work in tech, I’m talking to you,” Ressa said. “How can you have election integrity if you don’t have factual integrity?”

Read the essay Ressa wrote for PAW in 2020

She also called for more funding for public-interest media and urged the United States to repeal or reform a law that treats social media platforms as public utilities.

“We can continue on the path we are on and descend further into fascism, or we can choose to fight for a better world,” she said. “Please ask yourself: you willing to sacrifice for the truth?

While Ressa could face decades in prison, the Tigers have rallied in recent years.

“When the government started attacking me, Princetonians of different classes started coming together,” Ressa said, chatting in her suite at Oslo’s Grand Hotel during a rare break from an otherwise busy schedule. “It was the journalists first.”

Kathy Kiely ’77, a Missouri School of Journalism professor and Princeton administrator, teamed up with Tom Weber, ’89, president of the Daily Princetonian board, Mike McCurry ’76, and others to run a full-page ad in the PAW urging US officials to pressure the Philippine government to stop harassing Ressa.

“We started working on our connections…and I want to tell you that in maybe 72 hours we had over 100 names and there were real bruises,” said Kiely, who didn’t know Ressa. Those who signed included New Yorker publisher David Remnick ’81 and three-time Pulitzer Prize winner Barton Gellman ’82.

When they placed a similar ad in The Washington Postthe list of names grew to over 400. At the top was former Secretary of State George Shultz ’42, who died in February.

“I think people were thrilled to help Maria in this way because food is such a fundamental act of love,” Hurlock said. “Locked up in her apartment in Manila, facing all these terribly scary accusations from the government, trying to run her business, write a book… I just can’t imagine.”

During a virtual class reunion in May, Ressa explained how much it all means to her.

“I can’t begin to tell you how amazing Princeton and your support has been,” she said, choking. “Every time I receive something, I think of you and think of the goodness of human nature.”