Frank Langfitt ’86 works in an air-raid shelter in central Ukraine.

Langfitt spoke with PAW on his way to the Polish border

Reporter Frank Langfitt ’86 is NPR’s London correspondent, but for the past few weeks has been part of a reporting team in Ukraine. On February 26, as the Russian army was rushing into kyiv, he spoke to PAW as he traveled east towards the city of Lviv, near Ukraine’s western border. The trip covered hundreds of miles and his team was in a liquid natural gas powered car that couldn’t go far without refueling, so the trip was slow going.

He was with an NPR team that included Paris correspondent Eleanor Beardsley, Washington investigative reporter Tim Mak, two translators/editors and a few others.

Langfitt spoke over a poor cellphone connection, and sometimes he couldn’t be heard. This interview has been edited and condensed.

How are the roads?

Leaving, the roads are crowded – there are traffic jams for miles and miles. You see a country getting on a war footing. Until a few days ago most Ukrainians didn’t think this would happen, despite what US government intelligence was saying, and now as you drive west you see them building checkpoints control, with high barriers. We passed a checkpoint where they had an earth-moving machine and they were digging trenches for the soldiers. So things are changing really, really quickly. Almost all of the fighting has been in the east, so where we are there hasn’t been much.

How are the Ukrainians reacting? What do they say?

I think most of them are completely in shock. I’ve been here two and a half weeks, and when I got here they said, ‘Well, we’ve been at war for eight years, we’re used to this and until something happens, we don’t really believe that because a big part of Vladimir Putin’s strategy is to terrorize the public and then a few nights ago the missiles started pouring into places – kyiv, obviously, and places like Odessa, a number of other cities. Many [people] wasn’t quite prepared for it. Some had. And so they come to the idea that their country is facing a full-scale invasion by one of the main armies on the planet. It’s a lot to take in.

One thing that I find very interesting is that there is a real challenge. The world thinks it’s outrageous that Russia invades an independent, sovereign nation – a democratic nation – that hasn’t provoked Russia at all. This is a completely unprovoked invasion to serve President Putin’s political goals. And so one thing you’ve seen is the president, Volodymyr Zelenskyy, whose approval ratings weren’t that high before this happened, stand up and take a very tough stance, saying that Ukrainians won’t back down. Now you see many Ukrainians going for weapons, preparing to fight on the streets of kyiv and elsewhere. It was something to watch.

I think it was today or yesterday that the United States offered to evacuate President Zelenskyy, and he said, “I need ammunition, I don’t need to be transported. I was talking to civil defense people here and a lot of people in downtown Kyiv saying, ‘We need as many weapons as we can to fight the Russians’, and they want NATO and the United States. So that’s the big thing you hear is, “give us more,” and they would like a NATO no-fly zone.

The people on these roads with you, where do they go?

Most of them go directly to the Polish border. According to some reports, the wait at the Polish border can last up to 48 hours. People are sleeping outside, which I will probably do in the next few days. I have been here for a few weeks, and we have other journalists who have come to replace us. So I’m going to cross Poland.

It’s very delicate. We were looking at the map and we thought it was actually faster to go to Moldova, and there I was on my phone, googling something I never would have imagined: “Can an American citizen to enter Moldova without a visa? The answer is yes. But there are Russian troops in Transnistria. So we were very careful, we didn’t want to run into a group of Russian soldiers.

Does your team have experience with conflict zone reporting? 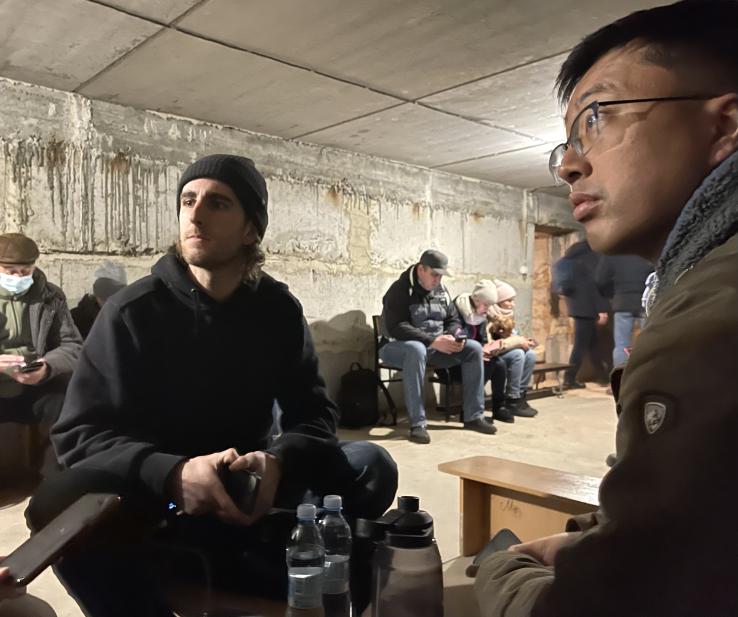 People wait in an air-raid shelter in Ukraine.

To varying degrees. Eleanor was here reporting from Ukraine when Russia first supported separatists in the east of the country. This has been invaluable as she knows people from these trips. When I was based in Africa, I worked in Somalia and Mogadishu, covering the civil war there. I worked in South Sudan, as well as in Bahrain covering the Arab Spring uprisings. But it’s very different. It is a ground war in Europe, which we hoped would be a thing of the past.

We believe that in kyiv there will be an occupation. The Russians are encircling kyiv, and they are going to besiege it in an attempt to overthrow the Ukrainian government. If that doesn’t work, they are expected to apply the highest possible pressure. If you’ve seen Vladimir Putin talk about Ukraine, he says it’s not even a country. He said they have no rights or sovereignty, so we shouldn’t be surprised if he is absolutely brutal with the people of these towns.

What do people think will happen?

I think they’re going to fight as hard as they can. They have what to fight. It is their country. It has been independent from the Soviet Union for about 30 years, it has its own national identity, it has its own culture. They don’t want to be part of Russia.

It could also be a disaster for the Russian military, if they cannot overthrow the government. It will be difficult for them to subjugate 41 million people, most of whom hate Vladimir Putin. So you could end up with a long insurrection here that could bloody the Russians and bog them down.

I was very impressed with the Ukrainian people. It is nice to spend time with them, they want peace. And now they are fighting back. Yesterday morning we passed an old Soviet cultural center where all these men were queuing up to be divided into units. And they were going to get their weapons and fight with the army. I saw that, driving through Ukraine, driving through small villages, people queuing up to join the army, to get their guns and fight the Russians. It’s quite incredible.

Is there anything else you would like to include?

Yesterday we traveled through part of Ukraine and passed through village after village, and we saw a lot. We ended up spending a lot of time in bomb shelters as the sirens were going off for air raids. The strongest image I have that day was in the basement of a kindergarten used as a bomb shelter. In one room they had set up all these little beds for the kindergartners, so they would have beds to sleep in during the Russian air raids. And to say that it is Vladimir Putin’s policy, to terrorize kindergartens. That’s what he does. 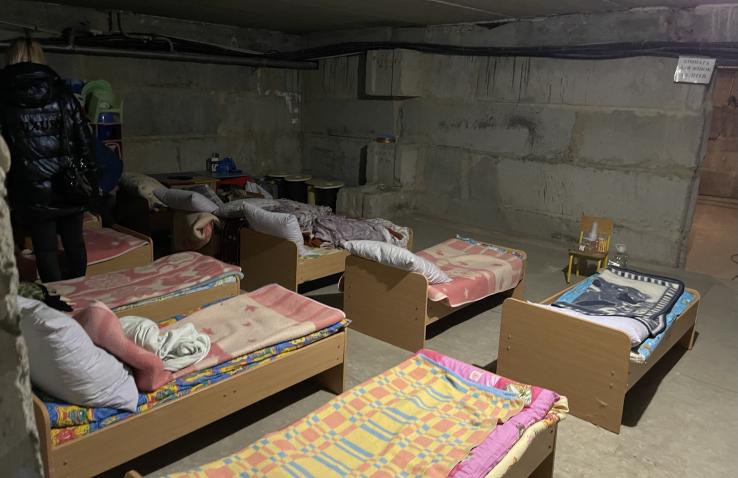 A bomb shelter under a kindergarten in central Ukraine.

Watch a video of Frank Langfitt ’86 in an air raid shelter in central Ukraine: