special envoy of israel for fighting anti-Semitism, actress Noa Tishby, suggested this week that three prominent American Muslims were motivated by ‘anti-Jewish racism’ when they condemned the shooting death of journalist Shireen Abu Akleh Palestinian American killed in an Israeli raid in the occupied West Bank.

Tishby, who was appointed to the post by Foreign Secretary Yair Lapid last month, argued in a conversation but deeply misleading social media video that only racism could explain why the killing of Abu Akleh – with gunshots that witnesses said came from an Israeli position – aroused so much anger.

A week has passed since the horrific death of Shireen Abu Akleh. This was NOT an execution or a targeted assassination. Unfortunately, journalists are killed around the world every week, without the same global reaction. This is the anti-Semitic double standard.

What Tishby did not say is that Abu Akleh is only the latest of more than 50 journalists to have been killed in the Israeli-occupied Palestinian territories since the early 1990s.” Despite this shocking figure “, wrote the current IFJ president, Younes M’Jahed, in the 2015 edition of the report, “no investigation carried out into the actions of the Israeli army concluded that there had been any wrongdoing or fault, and certainly no one was held responsible.

“Dealing with the murder of Palestinian journalists by the Israeli army, which enjoys political support inside Israel and internationally,” M’Jahed added, “will require making better use of the remedies available through the international law, humanitarian law and the laws of democracy. countries to demand effective investigations and bring perpetrators to justice.

Tishby went on to say that no one watching his video could name any of the other dead journalists – apparently expecting an audience made up entirely of people who had never heard of the well-reported murders of Mary Colvin and James Foley, to take just two examples. (And referring only to deaths in “war zones,” Tishby framed the discussion to entirely erase the waves of revulsion that followed the murders of Saudi journalist Jamal Khashoggi, Russian journalist Anna Politkovskaya and Maltese journalist Daphne Caruana Galizia.)

The sole reason for outrage over Abu Akleh’s murder, Tishby insisted, was a double standard applied to Israel that is “purely rooted in sometimes unconscious anti-Semitism, anti-Jewish racism.”

According to Tishby, this explains why none of the other deaths in war zones have elicited “such violent, hateful and horrifying reactions and rhetoric”, such as that of “the international community, social media celebrities and the United Nations towards Israel”.

At the time she made this claim, the examples that flashed across the screen were condemnations of the murder by three prominent Americans – Rashida Tlaib, Ilhan Omar, and Bella Hadid – all of whom are Muslim. Tishby made no reference to that fact and offered no explanation as to why she had only pointed to criticism of Israel from Muslim Americans, but the effort to pass their anger as the product of ethnic or religious fanaticism was clear.

Despite Tishby’s claims, there was nothing racist about Israel’s criticism of Abu Akleh’s death in the comments on the reports by Tlaib, Omar and Hadid that paraded across the screen. All three held Israel responsible, but they did so after witnesses previously said the fatal shot was fired by an Israeli soldier. Subsequent video evidence only made this more likely.

“When will the world and those who support apartheid Israel which continues to murder, torture and commit war crimes finally say, ‘Enough’?” Tlaib wrote in the allegedly racist section of a tweet highlighted in Tishby’s video.

When will the world and those who support apartheid Israel, which continues to murder, torture and commit war crimes, finally say, “Enough”?

Shireen Abu Akleh was murdered by a government that receives unconditional funding from our country without any accountability. https://t.co/c2yLpM7UC1

“She was killed by the Israeli army, after making her presence clear as a journalist,” Omar tweeted.

She was killed by the Israeli army, after making her presence known as a journalist.

We provide Israel with $3.8 billion in military aid a year without any restrictions.

What will it take to account for these human rights violations? https://t.co/MGSVc6jYXJ

“Shireen has dedicated her life to exposing Israeli military violence – and that’s what ultimately killed her,” Hadid wrote on Instagram. “She revealed Israel’s policy of letting its soldiers get away with murder,” added the American model, whose father is Palestinian. 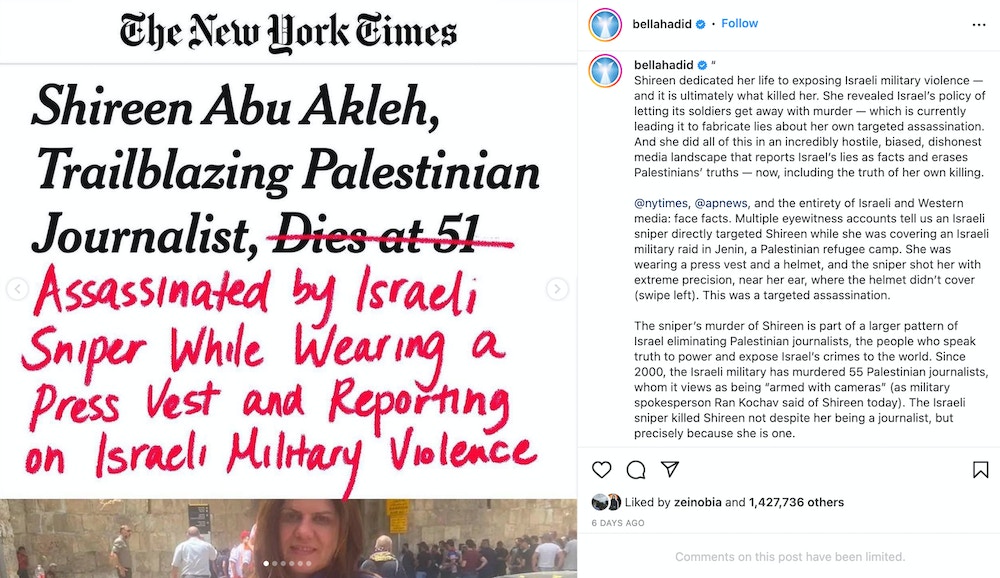 A screenshot of an Instagram post by Bella Hadid, an American model whose father is a Palestinian refugee from Nazareth.